A workshop of the history of the theater was held today at the art center where I work. The lecturer, stage director Ms Hatsumi Abe said that she realised that わかるwakaru ("I understand it" in Japanese) means "I can categorise it" recently. On the other hand, わからないwakaranai ("I cannot understand it" in Japanese) means " I cannot categoraise it to which groups". Actually we write wakaru 分かるusing kanji charactor means separate in Japanese.

One day, my ex-boyfriend said that he cannot understand a poem. The poem book is one of my favourite, written by Mimi Hachikai. He is an artist and also from a family on literature. I hoped he would like it. But at the same time I know it never happens that we can share everything.
But I've thought that it's strange that we say "I don't understand it" instead of saying "I don't like it". Is it common in only Japanese?
My father said that often against my mother's interests. I've felt a border between them. After I became adult, I understand we have many borders with others. It's hard to sharing something taste with others. We never understand eachother (as same as you never understand yourself). Therefore we want to know someone strongly. We want to understand someone even we know we never do that. If we can understand others totally, living together wouldn't be thrill. We wouldn't think to create anything. It must be boring. I realised after I've spent much time.

I hear that somebody say that s/he doesn't see any doors/tags/points to understand an art work. But I think we cannot say "I understand this art work" when we move completely.
The art doesn't have any doors. We cannot to enter into the art. The art enter into us. The art makes a door on us violently. 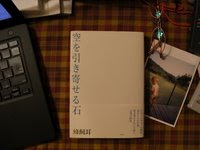 "Sora wo Hikiyoseru Ishi" is a new essay by Mimi Hachikai. I'm reading one piece a day. I remind the treasures in my childfood. Those were fragments of shell, coloured small stones, beautiful dead leaves etc, which I've collected in a small box.

a big typhoon is coming soon 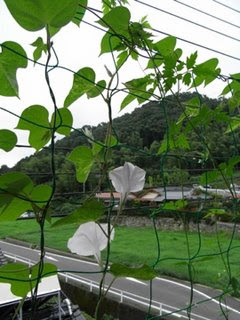